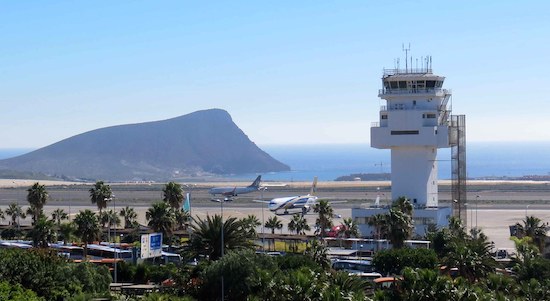 Tenerife South Airport lies in the south of the Spanish island of Tenerife. It’s the largest island in the Canary Islands.

Tenerife South Airport is larger than Tenerife North Airport and has many more international connections.

The airport is mainly used by holidaymakers during the summer and winter months. Popular holiday resorts, like Los Cristianos, Playa de las Américas and Costa Adeje are close to the airport. The airport handled over 11 million passengers in 2018.

The tourism in Tenerife is growing and is predicted that the passenger numbers keep increasing on the following years. The capacity of the current terminal is 12 million passengers per year, but the traffic in the airport has traffic peaks on Friday, when the airport is nearly at the maximum capacity.

The departures area features 34 boarding gates of which eight are equipped with jet bridges. The terminal was first inaugurated in 1977 and remodeled in 2007.

In 2009 the terminal was extended and currently the tourism sector urges to expand the airport. The terminal has a couple of floors - Ground Floor and First level.

Duty free stores can be found on several locations throughout the Tenerife South Airport, all well equipped with a solid selection of perfumes, fine spirits, cosmetic products, chocolates and tobacco products.

Tenerife Gourmet España is an interesting shop specializing in high-quality food products, including wine, cheese, oil and canned foods. Sweet Treats sells local sweets and candy and Casa Ricardo is the place to go for some sweets and nibbles sold by grams and small toys.

This airport also has a wide selection of shops offering designer clothes, shoes and various accessories, making for a perfect shopping experience before your flight. A Lycamobile store is also available at this airport for any SIM-cards or electronic devices. If you are after some late gift shopping, do note that you can find a wide selection of souvenirs at the airport shops.

When it comes to food and drinks, the Tenerife South Airport has a large number of places you can eat at, including: And for a hot-dish experience, head to O'Learys to enjoy a wide variety of starters, grilled meats, salads, sandwiches with an international touch, in a sporty, warm and very pleasant atmosphere.

In addition, you can relax and watch planes taking off and landing from the vantage point of the airport’s observation deck.

If you want to get through security “quickly” you can pay 4.00 € per person (pre-book online) with the Fast Lane service.

There is a direct bus service between Tenerife South Airport and Tenerife North Airport, travel time between the airports is 50 minutes by bus line 343.

In addition to this public transportation option (or perhaps paying for a taxi service), you can also book a reliable door-to-door private transportation with UpTransfers, carried out with a modern fleet of fully licensed and insured vehicles, and be welcomed at the airport by an English-speaking driver - an excellent choice for traveling with style.